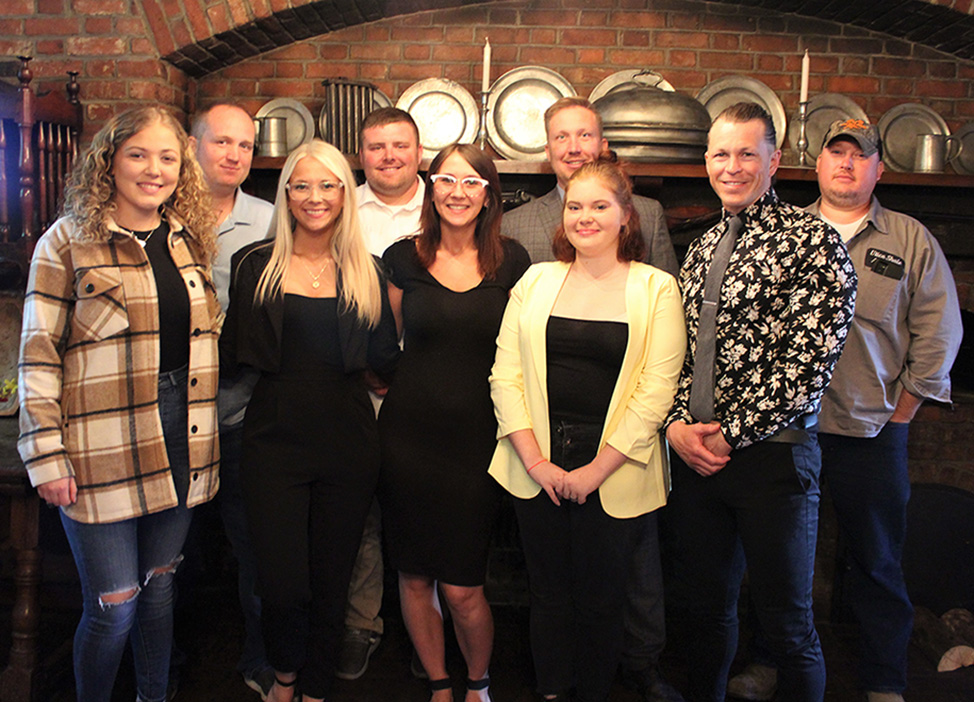 SALINEVILLE-Perseverance definitely paid off for Emily Galchick, a newly minted graduate of  the Utica Shale Academy who was among 16 students statewide recognized by the Ohio State Support Team.

Galchick, of Minerva, won the SST Region 5 R.A. Horn Award for showing tremendous academic growth. The award, which was established by the Ohio Department of Education in honor of the late Assistant Superintendent of Public Education Emeritus Dr. Raymond A. Horn, is given to one exemplary special education student from each of Ohio's 16 State Support Team regions. Galchick, who studied in the industrial maintenance program at USA, was surprised recently with the award by SST-5 consultant Dr. Marla Peachock at an assembly in the Southern Local School District, which sponsors USA. She also was the guest of honor during a celebratory luncheon at the Spread Eagle Tavern and Inn in Hanoverton on May 27.

USA Superintendent Bill Watson said Galchick was nominated because of her impressive transformation and officials were excited to see her earn the award.

“Sixteen students are chosen throughout the state and each regional SST chooses one winner. SST Region 5 has chosen Emily,” Watson said. “She’s already very independent and lined up a job at the Minerva Dairy. She is very well-deserving. We’ve had her here over the past three years and she’s really grown and adapted to become a leader.”

While at USA, Galchick learned about electricity, multimeters, hydraulics and the principles of advanced manufacturing. She also attended the New Castle School of Trades in East Liverpool and was a direct hire at the dairy upon her graduation on May 31. She was assisted by intervention specialist Mike Skrinjar and Laura Krulik, special education coordinator for Southern Local School District, while instructors Carter Hill, Matt Gates, Nick Woods, Maia Amato, Paige Beatty and Mariah Hart were also on hand along with Galchick’s family for the luncheon. Skrinjar praised the teen for her fortitude, saying even though she faced tough times she did the work and persevered in the end.

“The amount of growth she’s [exhibited] is amazing,” he said, noting her profound drive and work ethic. “I think she has blossomed into a great young lady throughout our time together. She really enjoys the idea of the next phase over her life. Everyone has had an opportunity to be part of Emily’s academic success, and even though we’re growing [at USA], Mr. Watson has a great staff. We make sure we are there for the kids and the kids really feel that.”

He read her nomination letter during the event and said she was very deserving of the honor. He recalled her shyness upon their first meeting, then noted how she dedicated herself to gaining an education.

“She did an awesome job, especially during COVID,” he said, adding that Galchick had tutoring plus support at home to help her through the hard times. “Her level of confidence [is outstanding]. We teach students that they can do hard things. They can take time and learn from mistakes and also develop a work ethic.”

He added that seeing her grow made it worthwhile to be an educator, and she’s gained certification and other experience to put her on the right track with her career.

“As a teacher, it’s what we look forward to. Emily did everything she could to try to make us proud. She would become successful and employable. You are one of our success stories. It’s your responsibility to go out and represent us.”

Galchick shared a few words of her own, thanking her teachers and loved ones, including parents Matthew and Samantha, for their support and saying she never thought she would make it through high school.

“I feel very happy getting the award. It was an honor,” she said, adding she was aware of the nomination. “They kept [my winning] a secret from me.”

She said she entered the industrial maintenance program to follow her grandfather’s footsteps since he was an electrician. Galchick also works at a local healthcare facility and planned to start her new job at Minerva Dairy on June 6.

She praised USA, calling it a great school that helped prepare her for the next stage of her life. All of her hard work earned her another “middle name,” as Skrinjar called it: Greatness. And it was one Galchick planned to wear with pride on her graduation cap.

“I think my teachers are amazing and they are teaching me to be a better person,” she said. “I’m very grateful for my teachers who brought me to this moment. I love each and every one of them.”

Emily Galchick, a newly minted graduate the Utica Shale Academy in Salineville, was among 16 recipients of the R.A. Horn Award through the Ohio State Support Team. Galchick, of Salem, was also the guest of honor during a celebratory luncheon with USA officials and family at the Spread Eagle Tavern and Inn at Hanoverton. She is pictured with instructors, front from left, Maia Amato, Paige Beatty, Mariah Hart, Galchick and Mike Skrinjar. Back: Nick Woods, Carter Hill, Superintendent Bill Watson and Matt Gates.