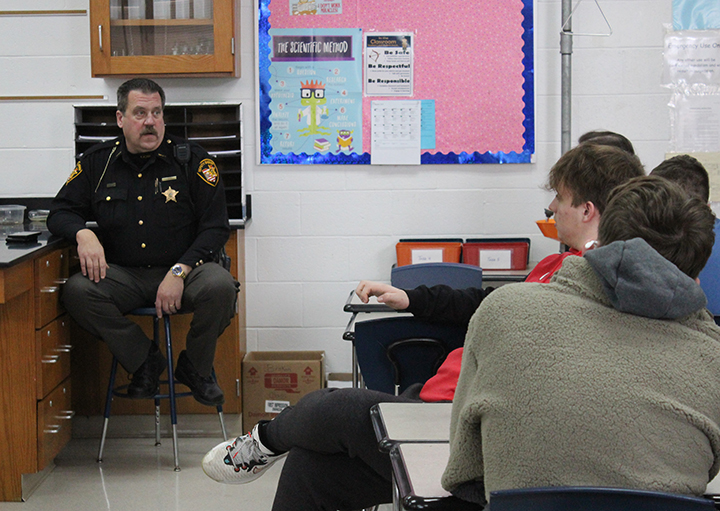 Deputy Haugh rose through the ranks to become detective sergeant, where he investigated homicides and other major cases. The Wellsville resident, who is married with three children and six grandchildren, retired on Dec. 31, 2020, but returned to the patrol division one day later. When the opportunity presented itself to become SRO, he was assigned to Southern Local Elementary and Southern Local Jr./Sr. High Schools to aid the district and students. He began those duties on Jan. 3.

“I enjoy working with the kids,” he said of the change. “I thought, ‘Why not do what I like to do?’ I’m just really open-minded and anything they need me for, I’m here.”

Among his work so far has been to bring the CCSO K-9 officer to visit the pupils, offer ideas to bolster campus security and speak to elementary and high school students about character programs and other topics. The latter included sitting down with the forensics class at SLHS and answering questions about using his skills to put criminals behind bars.

His background is quite diverse, having worked at a pharmacy and funeral home as well as the sheriff’s office. Haugh said he had no initial plan to go into law enforcement; however, his path took him there and he graduated with a bachelor’s degree in criminal justice from Kent State University-Salem with subsequent police academy training. His 31-year career began at the county jail before he joined the road patrol. Finally, he elevated to the detective division and even became one of two local hostage negotiators and part of a joint task force to investigate major crimes. He spent 18 years as a detective before stepping down in 2020, and then he was rehired in road patrol division before joining Southern Local.

“I wanted to see some continuity in the [SRO] position and I think I have a lot to offer,” Haugh commented, saying Southern Local leaders had a vacancy he sought to fill.

He’s been settling in quite well and answering to the names “Deputy Jeff” or “Deputy Woody”—the latter a nod to his apparent resemblance to the popular “Toy Story” character. These days, he looks forward to working with students and visiting classrooms for more discussions. He also plans to take part in the Kelly Bear program to promote good character among elementary students.

Southern Local Superintendent Tom Cunningham welcomed the new SRO and said Deputy Haugh was a great addition to the staff.

“He brings a lot of experience with him to this position, which will enable him to be an asset to students, staff and the community,” Cunningham concluded. “Not only will his presence be a safety measure, but his ability to communicate and build relationships will be valuable.  He has jumped right into the position, reviewing our safety plans, talking with classes, being visible and approachable.  We are fortunate to have him here at Southern Local.”

Deputy Jeff Haugh, a recently retired detective sergeant with the Columbiana County Sheriff’s Office, has put his roots down at Southern Local Schools as the new school resource officer. Deputy Haugh spent 31 years with the CCSO and began his latest role on Jan. 3. He said he is eager to work with students and the district.