Students Take off with Flight Simulator 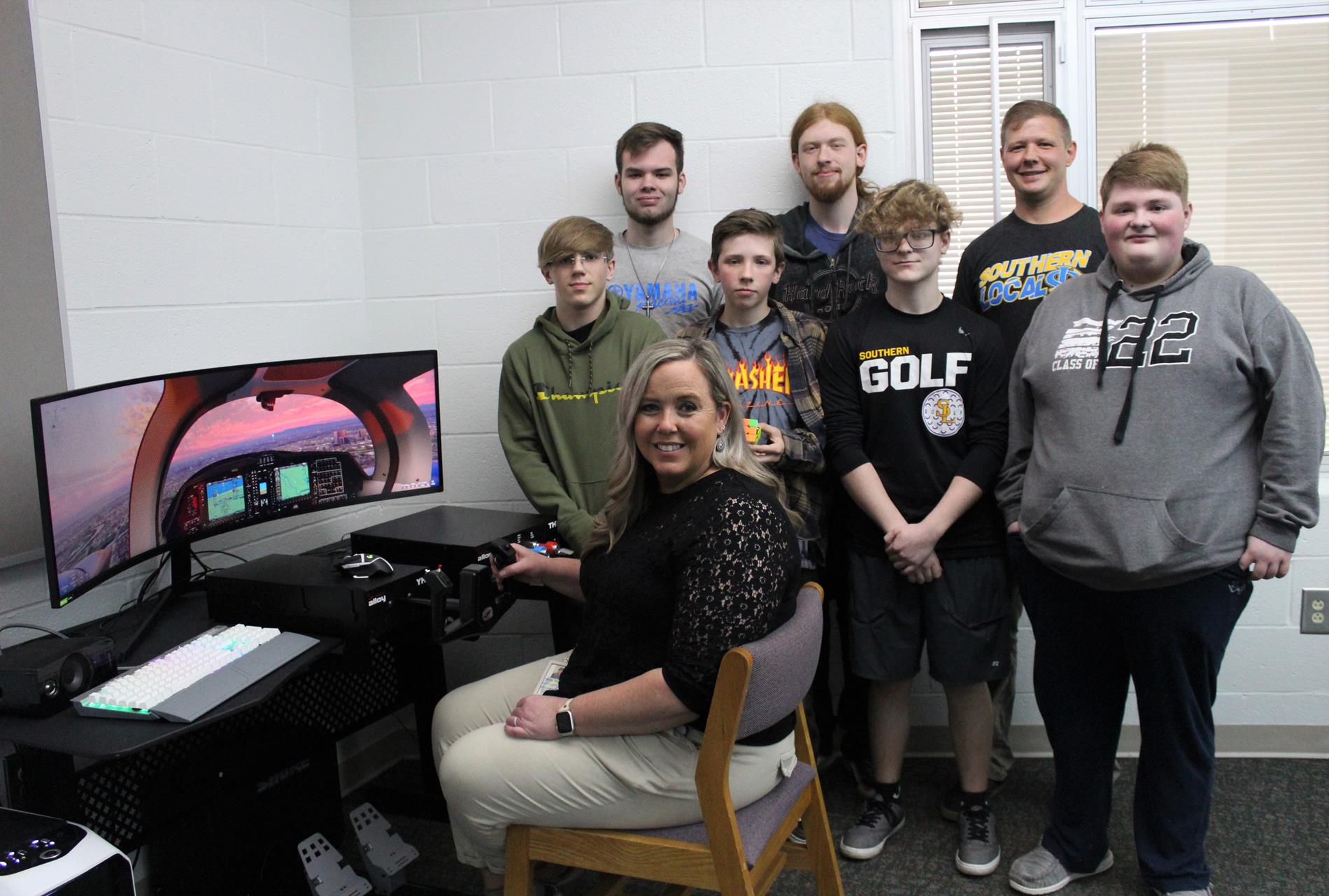 Students Take off with Flight Simulator

SALINEVILLE-Students can head to the Wild Blue Yonder without leaving the classroom through a unique new flight simulator at Southern Local High School.

District Technology Director Josh Manist and his group of high school tech interns created a custom-built system for Emily Forbes Bowling’s aviation classes to help give her 50 pupils a bird’s eye view as they learned about flying. Bowling said she wanted to add equipment for the past two years, and when school leaders permitted the plan to take off, Manist assigned the task to his talented young team.

“We started getting a plan together and ordering parts,” said Bowling. “It was March when they started assembling it.”

The total manhours equated to roughly a week, and in the end her class was outfitted with a new computer which also had been built by students, a Microsoft Flight Simulator program, a 48-inch-screen-sized, single ultrahigh resolution monitor and rudders, yoke and throttle quadrant through Redbird, the latter of which are controls used in actual flight schools. The system uses a Google Earth program to simulate different aircraft in any part of the world, from Youngstown to New York City and even Japan, and can even include live weather and air traffic patterns plus communication with multiple players. Bowling, a licensed pilot, took a turn and mimicked flights in a Cessna 152 at the Youngstown-Warren Regional Airport, along the Hudson River in New York City and in the horizon above Rio de Janeiro, Brazil.  Bowling planned to start using the equipment in May.

“You can literally fly anywhere in the world, from your backyard at the local airport to somewhere really exotic,” she continued. “It’s pretty realistic.”

“Calibrating the controls and flights was the most difficult part,” Manist commented. “It’s good equipment and everything is well made. We ordered all the parts to be as realistic as possible for the training. It would be exactly what they see if they go take flying lessons.”

Bowling said three aviation classes are being held this year and she is incorporating more junior high students to learn about airplanes, rockets, helicopters and drones and they even will visit the Columbiana County Airport in May to talk with other pilots and see actual aircraft. The course, which has been offered for the past two years, has even inspired some pupils to seek a potential career in the skies.

“One of the kids in last year’s class approached me about getting a pilot’s license and is thinking of going into the Air Force,” she said.

With the simulator, students will have a chance to practice should they also decide to pilot a real plane in the future. Bowling was grateful to Manist and the tech team for their hard work while team members also enjoyed the experience.

“It was fun to put it together,” said senior Damon Allen. “We’ve been building computers for a while and the system is awesome. If you want to learn about aviation, [the class] would be a huge step forward.”

“It was a good experience,” added senior Scott Pelley. “I learned a lot about aviation.”

“I thought it was cool that we could work on it and fly it,” Zane added. “It’s one of the best things and I can play on it.”

He also showed interest in taking the aviation class in the near future.

Westover said the computer included the largest CPU’s and graphics card and Bowling helped source the parts for the system, plus the large, curved monitor added an extra sense of realism for the panoramic views.

“The size factor [of the monitor] is hard to find and this fit the role perfectly. With the help of Mrs. Bowling and everyone, we got this made and it’s possible for everybody to use it. We had fun putting this together and testing it.”

Meanwhile, Manist has had tech interns for the past nine years with students in grades 9-12, but he is looking at adding underclassmen. The interns have been responsible for preparing Chromebooks for state assessments while Zane Manist and Westover have also created model airplanes to fly outdoors, but he said it would be great to build an even better simulator, if possible.

Southern Local High School Technology Director Josh Manist and his group of tech interns custom built a flight simulator for aviation classes led by teacher Emily Forbes Bowling, who is a licensed airplane pilot. The system allows students to take off without leaving the classroom and the system was a very involved but rewarding experience for the students who created it. Pictured are Bowling, seated in front, with Scott Pelley, Zane Manist, Sebastian Bach and Damon Allen. Back: Bobby Westover, Kayden Korbel and Josh Manist.