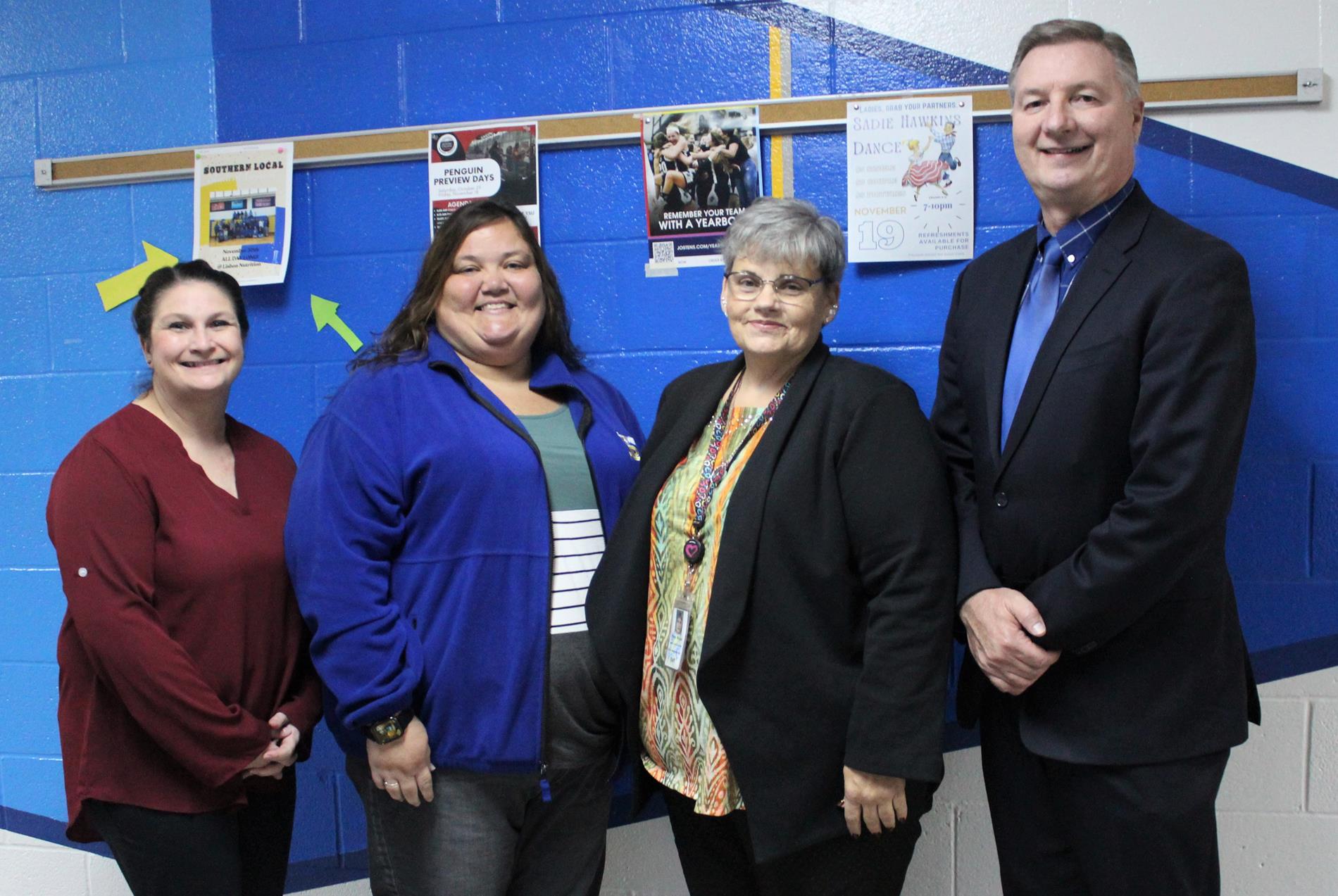 SALINEVILLE-Southern Local Schools are seeing a lot of success these days among its teachers and students.

Officials discussed the good news during the Nov. 7 school board session and, among other topics, congratulated three of its teachers for receiving grants for the classroom. Holly Davis, Karen Marquis and Tracey Richards each received a $660 Best Practice Grant through the Jefferson County Educational Service Center that will be put towards innovative classroom projects. JCESC Director of Curriculum and Professional Development Ron Sismondo doled out the awards during the monthly Southern Local school board session on Nov. 7 and praised the educators’ creative ideas.

“I am here to deliver three Best Practice Grants to three of your teachers,” he said. “We raised [the amount] by 10 percent to $660, or about $1,980 total. There were 45 applications and five from Southern Local. They were all good and we selected three from your district.”

Davis, who instructs kindergarten, plans to share her “Daily 5 in KC” reading and Language Arts project with other kindergarten classes and provide activities for hands-on, independent learning. She will purchase supplies so teachers can focus on individual student needs while keeping the children engaged. Among the choices are “Read to Self,” “Work on Writing,” “Read to Someone,” “Listen to Reading” and “Word Work,” which she said would help students become independent learners as well as better readers and writers.

“I have 18 students in my classroom,” she said. “I will also share the activities and supplies with the other three kindergarten classes for use in their Daily 5 rotation. My students will benefit for years to come because of this grant. I am truly thankful for this opportunity. I would like to thank JCESC and Southern Local for the opportunity to apply for such an amazing program to benefit my classroom today and in the years ahead.”

Marquis, who instructs fifth-grade math and science, will utilize her windfall for “Creating Stories in the Sky.” She will purchase a Homestar Flux planetarium project while students work together and use problem-solving skills to construct a 16-foot-by-10.5-foot planetarium. It could be set up in the gym and is large enough for classrooms of 23-25 pupils to view constellations which could only be seen from Earth’s Southern Hemisphere.

“I will have all of my 44 students working to construct a planetarium. All of the elementary students will be invited to use it this spring after it has been constructed,” Marquis said. “I am so excited I received the grant because it will allow me to bring the universe to life for my students. Instead of us going to a planetarium in Pittsburgh, the students can experience a smaller version of it every year by making our own reusable planetarium here at Southern. I want the students to be able to see the universe from different aspects of the Earth. It went with this year’s theme of ‘Build, Build, Build.’”

Richards, who serves as a full-day preschool teacher, plans to implement “Preschool STEM and STEAM” kits in a cross-curriculum method to assist with literacy and engineering skills. Teachers will read stories to students in a group activity, then the pupils will be able to act out the stories using puppets and complete an included STEM challenge. The project will benefit about 24 full-day preschoolers annually as well as an additional 32 students each year in half-day classes.

“I am very excited to have been chosen to receive a Best Practice Grant from the Jefferson County Educational Service Center,” she said. “The goal of the project is to make a multi-dimensional approach in supporting students’ language and literacy skills as well as supporting their creative expression that will allow them to master early engineering.”

“I have 27 players this year,” he said, adding that many were on the honor roll or participated in the College Credit Plus program. “We have a great group of student athletes. Many of the athletes we share with Coach Wright and Coach Exline.”

He noted that it was great to see athletes performing in several sports while also excelling in the classroom.

Grimm also hoped to spotlight past participants since it marks the 60th year for the school’s basketball program. Among his ideas are to honor past homecoming queens as well as previous 1,000-point scorers “so kids can see those who have had successes beyond these walls.”

He added that the team was gearing up to play East Palestine at the Rocket Mortgage Arena in Cleveland in the spring and students and families will also have a chance to take in a Cavaliers game.

“We’ve had multiple families wanting to contact us for tickets and it’s not for months now.”

Cunningham said a second safety drill was conducted on Nov. 1 and roles were switched, with elementary students being evacuated and the high school placed in lockdown for an “active intruder” scenario. The latest drill was conducted inhouse and on a smaller scale with no safety forces involved, unlike the first drill on Oct. 19.

“It went very, very well,” he said, adding that issues which arose in the previous scenario were addressed with the latest event.

He added that the elementary school was hosting a pajama drive while a hat and glove collection were also planned. He said the latter would also benefit the high school building. Furthermore, he lauded Wright for his 150th win as a coach and highlighted graduate and past school FFA member Dalton Frischkorn, who received his American Degree during the National FFA Convention in Indianapolis.

Wright commented that MAP testing was completed but state testing would begin, while classroom observations were also set. He temporarily switched hats and said the football team was focused on the Region 25 semifinal against Warren JFK on Saturday at Canfield.

“The kids are playing hard and the community is behind us. Academically and athletically, we are on pace.”

Beadnell congratulated the three elementary teachers on obtaining the grants and said plenty was happening in her building.

“Karen Marquis is working with teacher Janice Pierce on robotics,” she said. “They built a track with robots and will compete in their first competition in December and they had a kickoff day to get it started.”

She added that Jeff Gill of the Columbiana County Educational Service Center spoke to the team members about coding since the students are also learning about computer technology. Beadnell then added that a fifth-grade student council was formed and currently has six members who will create spirit signs in the elementary gym for junior high and youth league games and work on special lunch menus with district Food Service Director Samantha Fryman, plus they might raise money to assist the PTO with the fifth-grade graduation. Other subjects included recognizing students of the month and plans to take part in the school-wide Veterans Day program on Friday.